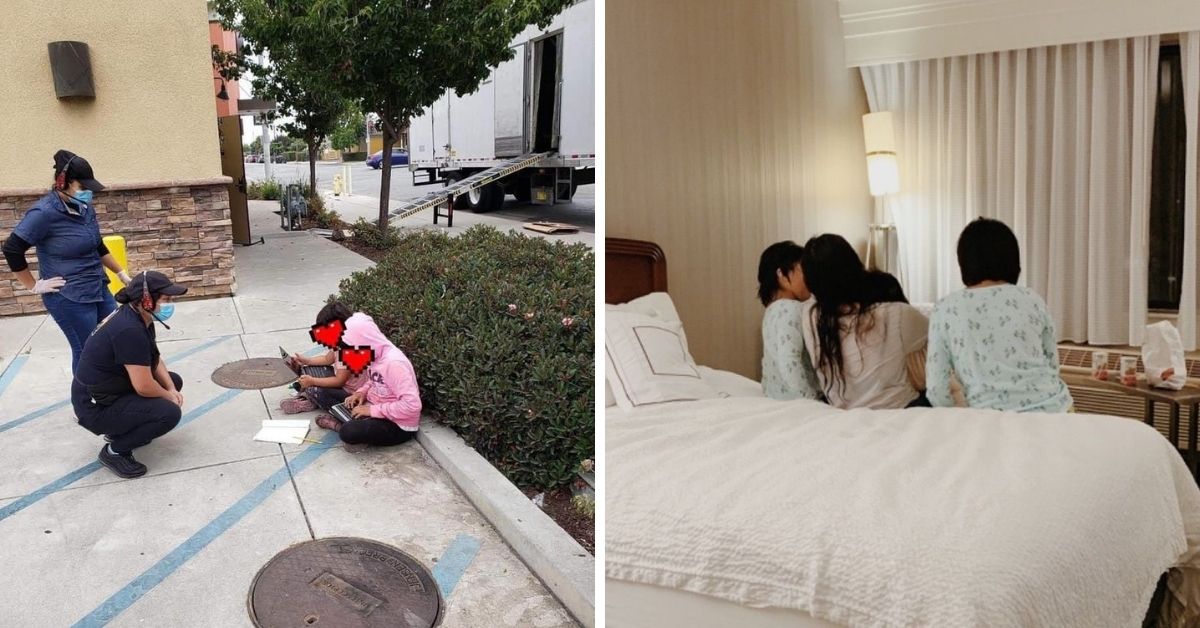 Many families are currently opting to do remote classes in lieu of sending their kids to school amid the continued risk of coronavirus. However, this hasn’t been an easy adjustment for everyone. For some, there are difficulties to worry about, such as “how can you do remote learning if you can’t afford the proper technology?”

While most of us take our Internet service for granted, it’s sadly not the case for everyone.

Last week, the Internet quickly responded after a photo was taken of two young girls in California who were using the free WiFi in a Taco Bell parking lot to do remote school work.

The photo showed two girls can be seen sitting on the sidewalk outside a Taco Bell in Salinas, California.

An employee noticed them

The girls were working on laptops, when a Taco Bell employee went to talk to them. They were doing their schoolwork, sitting outside of the restaurant.

The picture caught the attention of the Salinas City Elementary School District. They “immediately provided the family with a hotspot,” as Richard Gebin, public relations officer for the district, told USA TODAY, so that they wouldn’t have to use the free wifi to connect to their lessons.

One woman decided it wasn’t enough

Moved by the picture, Jackie Lopez decided started a fundraising campaign for the family after learning the family was going to be evicted from their home, according to a GoFundMe.

She managed to track down their mother, Juana, a migrant worker. The picture is a drastic reminder of the divide in incomes and how, for many migrant families, daily life is a constant struggle.

“I asked her if I could get her girls a desk for distant learning and she mentioned there was no space in their home for that,” Lopez wrote on the GoFundMe page.

She then said she shared a small bedroom with her 3 girls in the home she was living in.

Lopez started the fundraiser after she learned the family was going to be evicted from their rented room. The fundraiser has since raised more than $140,000 and the family is working with an accountant to manage the funds.

According to Jackie’s update on their GoFundMe page, Juana is incredibly touched by the kindness of strangers and has plans for her daughters’ future.

She has a lot of plans for the future; she plans to use some of the funds to purchase her first vehicle. She will also use part of the funds to rent a home while they look for their forever home. Another part of the funds will be used for College Funds for her three girls because education is one of the most important things to them.

Watch this Goalcast video for a less negative outlook on life:

The school district responded too

“The digital divide is very real and delays in
receiving needed technology are a statewide concern,” Amy Ish, president
of the Salinas City Elementary School District, said in a statement. “We
are grateful the State is making technology a priority and look forward to
receiving these hotspots in our District.”

The Salinas City school district is currently in full distance learning mode, according to Gebin and they have distributed 8,245 Chromebooks and 1,500 hotspots and are now waiting for 2,500 additional hotspots to be delivered.

“This is California, home to Silicon Valley…but where
the digital divide is as deep as ever,” Kevin de León, president pro
tempore of the California Senate said in a tweet Friday. “Where 40% of all Latinos
don’t have internet access. This generation deserves better.”

Monterey County Supervisor Luis Alejo also shared the photo on Twitter Wednesday saying, “we must do better & solve this digital divide once & for all for all California students.”

A spokesperson for Taco Bell Corp. called the photo “a
tough reminder of basic inequalities facing our communities,” in a
statement emailed to USA TODAY.

“We and our franchisees have always been passionate about supporting youth education, and the owner of this restaurant is looking into additional ways to support these students and the broader community,” a spokesperson said in an email.

This Is How You Slowly Learn You Can Only Hold So Much Space For Someone Who Doesn’t Want To Change
Child not going back to school? Make the most of home learning
What to harvest from your garden when frost is in the forecast
These 3 Sentences Will Change Your Life | Lisa Nichols | Inspiring Women of Goalcast
5 Reasons Why You Should Share Your Gift With The World