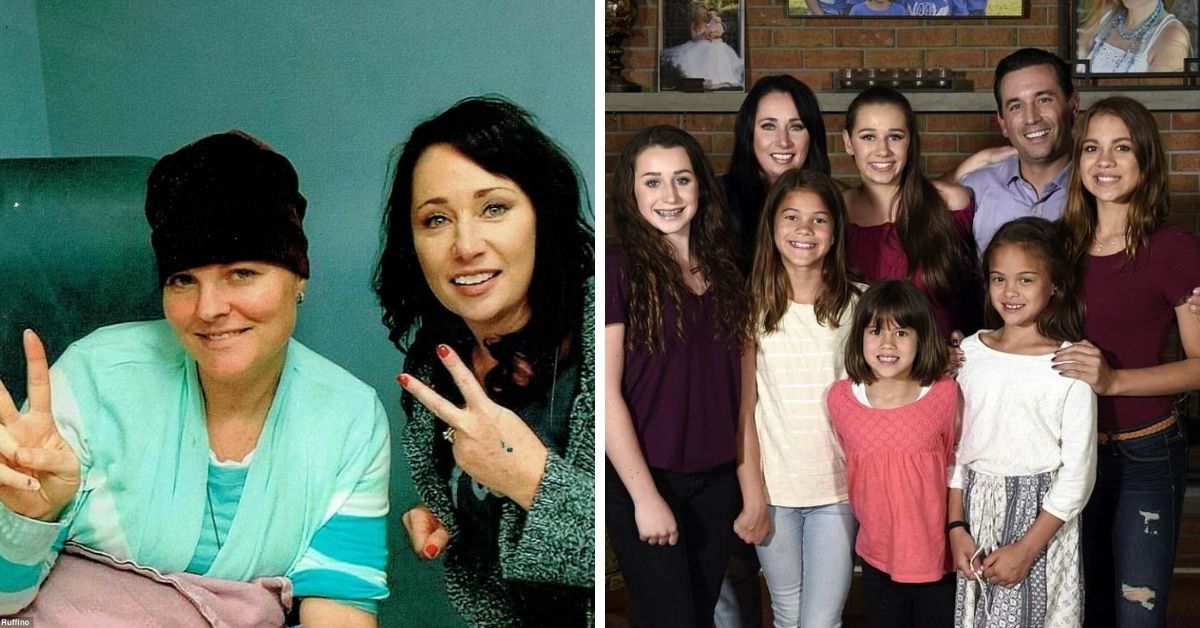 When Laura Ruffino’s long time best friend, Liz Diamond, was diagnosed with brain cancer in 2014, Ruffino was devastated – but the same event that tore her heart to pieces also led to an incredibly touching story.

After Liz was diagnosed with cancer, Laura made her friend a dying promise–she would take her daughters in, as her own.

Liz was her longtime best friend

Laura had been in fifth grade in Buffalo when Liz transferred to her small Christian school. The two instantly became friends.

“In one way, Liz was kind of quiet and well-spoken, but in other ways, she was funny and could be loud,” Laura says.

It was a perfect balance. Liz was just kind of like my person, if that makes sense.

They didn’t go on to attend the same high school but remained close, and Liz, who worked as a writer and artist, eventually moved to California, where she gave birth to her first three daughters. She returned to Buffalo when she was pregnant with Lilyan, and the best friends watched their children grow up together.

“It’s surreal, because from a girl point of view, the girlie stuff that Liz and I did in the sixth grade was the stuff that Grace and Tara were doing,” Laura says.

Everything changed in 2014, when Liz woke up and could not move.

Liz immediately was brought to the hospital where they found a dozen tumors on her brain, including one pressing and hemorrhaging on her brain stem. The prognosis was terminal.

“I knew her diagnosis; I’m not sure she knew her diagnosis,” Laura says. ‘I believe she was told at the very beginning. Either she blocked it out or wasn’t very coherent at the time. The doctors would only talk to other people; they would not tell her anything. She did not want to know, because she thought that would stop her fight – and then she didn’t want to lose the light. She wanted to hold the light because she wanted to be here.”

Laura promised to look after Liz’s four daughters –Samona; Tara, now 14; Ella, 9; and Lilyan, 7, and add them to her family with husband Rico and their two biological daughters, Isabella and Grace, now 14.

And while she misses her best friend terribly, she’s so
grateful for the new family she has because of her.

“This was our third Field Day without Liz,’ said Laura in an interview that took place as the expanded family was preparing to celebrate an annual local festival. ‘The first Field Day was awful, because Liz loved Field Day … that was her thing. She would be there with the chair and the snacks and she would be like the Kool Aid mom of Field Day. The first one was really, really hard, because I just thought, “Liz should be here. Their mom should be here. I should be here with her.”

Liz refused to accept the reality of her prognosis at first, but as time went on went, she finally discussed her daughters’ future with her best friend Laura.

“We got in the car, and it was a cold day and she had no hair, and so she had to keep her hat on,’ Laura says in The Daily Mail. “She goes, ‘I need to talk to you, because I want to talk to you about the cancer.’ And I go, ‘OK,’ and prior to this I tried to talk to her about what would you do, and she would not go there.”

And everyone was worried, because when you knew her diagnosis – or I knew her diagnosis – was terminal, you may just not wake up the next day. And then what would happen to these girls? She said, ‘If anything ever happens to me, I want you to take the girls.’ And I said okay.

Watch this Goalcast video to find strength after difficult times:

For Laura there were no questions about it

As soon as Liz made the request, Laura knew she would honor it. In fact, she had always thought Liz’ daughters belonged home, where they lived.

And the most heartwarming part was, her husband was already thinking about the same thing.

“I did not come home and talk to Rico about it,” Laura continued. “People think it’s funny; they’re like, ‘Oh, did you and your husband discuss it?’ It’s like, no, it didn’t work that way. That’s just not how Rico and I are.”

“I obviously knew the situation going on, and something just came to light inside me and said, ‘You need to offer to take these kids,’” Rico says.

They built a strong bond as Liz’ was withering away

Liz’s daughters did not know what the plan was, but were spending more and more time with Laura’s family.

“As Liz’s body got weaker, our bond got stronger – and then it kind of made sense to me, like this was kind of God’s plan of them building a strong relationship with us, if that makes sense,” Laura says.

Gradually, Laura would prepare Liz’ daughters for their eventual move into their home. “We would sit around the dinner table and say stuff like: ‘If you lived here, what color would you want your bedrooms? And how would you want your room set up? And wouldn’t that be cool, if we could all be sisters? And that’s how we slowly just prepped them – by making the transition, staying here more,” Laura continued.

But all this time, the girls had no idea their mother was dying.

It was funny, because I never really realized … they always wanted to come over, and I kept trying to send them back. I was thinking to myself, ‘Please spend as much time as you can with your mother.’ They didn’t know how sick she was.

“Liz never told her children she was terminal, ever. It was the shock of a lifetime,” Laura says. She wanted to protect them during the little time she had left on earth.

Liz died on April 4, 2017 – and her daughters soon began the process of becoming Ruffinos. Laura already had 2 daughters with her husband Rico and her family was about to expand, officially. The most difficult part was to process Liz’ death, knowing her daughters had no idea that it would happen. For Laura, it was an incredibly demanding challenge.

I sat down on the floor and we cried. I told them I was sorry and I was going to be their mom.

“So remember, Liz never told them, so they had no clue. I was trying to transition, to be like, yes, Mom’s gone, and I’m going to be your new mom, was really hard. And Ella said, “What do we call you?” And I said, ‘I don’t know.’ I mean, just because you’re an adult doesn’t mean you have answers,” Laura said.

Part of the challenge was also to honor Liz’ memory, knowing that she was now going to be their official mother. “I didn’t know if I was disrespecting Liz, I don’t know, and what is the right answer?” she continued.

So I said, ‘You can call me anything you want. And Ella said right away, ‘I’m going to call you Mom.’ What I think is that they just felt comfortable in just using the word.

Laura recalls beginning to cry at that moment, and tears falling on the laundry she was doing. “Thank God I didn’t finish laundry,” she jokes through the tears.

Not every daughter adjusted the same way. For Samona, it took her a while to call her “mom” but when she did, Laura immediately felt the connection.

And one day she said ‘mom’ – and I didn’t address it. I heard it, I felt it, and it was like emotionally, oh my Gosh, she feels that connection!

A few weeks later, Laura was able to address it. “You know, Samona, it’s okay that love is multiplied and not divided; it’s okay to love two moms.”

But there were challenges too

Going from 2 kids to 6 was certainly no easy transition. “Anyone who knows Rico and I, we did not go on dates, we did not have mommy/daddy time, everything was with our family,” Laura admits. “So our kids went to our anniversary dinners.”

The change meant that she would have less time to dedicate to her biological daughters. “I lost a lot of time with Bella and Grace; that was really hard. I do think that Gracie shut down for a while, and it was hard – because as much as Grace thought she needed me, I thought that the girls needed me more.”

Laura also worked full-time, which did not ease the process at all. But the challenges brought them closer than ever. Now, Laura sees no difference between hers and Liz’ daughters.

Now there’s times I forget … when sometimes people say ‘your girls,’ I now find that offensive, because I’m like, ‘Which ones?’

There is always room for more love

There’s no telling how big the heart’s capacity for love is. Laura’s love for her friend Liz defied her death. In honoring her promise, she has also honored their friendship and given 4 girls a place they can call home.

Laura’s incredible strength and resilience should inspire us to look beyond obstacles. She led with her love for her friend and her daughters, and was able to give them a beautiful home after tragedy.

5 Reasons Why You Should Share Your Gift With The World
What to harvest from your garden when frost is in the forecast
From toilet paper to electric guitars: How shopping habits of Canadians changed during COVID-19
26 Things I’ve Learned in 26 Years
Coronavirus: 3 dos and don’ts when it comes to social gatherings