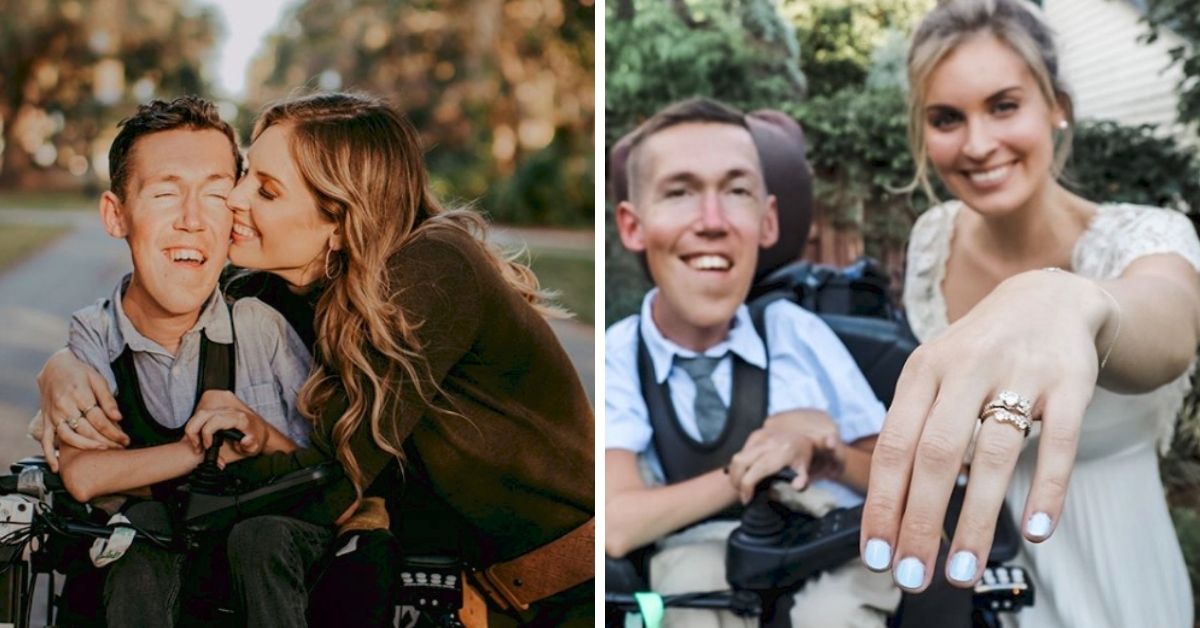 To the whole world, Shane Burcaw, 27 and Hannah Aylward, 24 definitely look like a strange couple. Shane is disabled and suffers from Spinal Muscular Atrophy (SMA) which causes his muscles to deteriorate over time. While his condition can be perceived as disheartening to many, Shane never let it dictate how he lived his life.

So when he found love with Hannah Aylward, he knew the world needed to see their relationship for what it really is. They created a YouTube channel that has become something of a viral smash. Their videos focus on sharing what relationships look like when one person lives with a physical disability and the other does not.

It’s a very real situation, and it’s something that reflects
real life, but doesn’t always get the attention it deserves.

Hannah sent him one fateful email

Shane was born with Spinal Muscular Atrophy (SMA) and had been on a wheelchair since the age of 2 years old. His current condition causes him not to be able to move his limbs.

‘The Office’ actor Rainn Wilson produced a documentary about his life and after watching it, Hannah felt compelled to reach out to Shane, who was a writer and public speaker at the time.

In her email, Hannah told him that she admired his writing and sense of humour, but also ended it with “P.S: I Think you’re cute.” Over time, they corresponded over Facetime and got to know each other. Soon enough, they said “I love you” to each other and Shane moved in with Hannah. She then became his primary caregiver.

When they first started dating, they had to deal with the world’s perception of their relationship. After all, the two couldn’t be more different. Hannah is a tall, athletic blond woman. Even though Shane has the head of a man, his body is of a skinny toddler. When they are out together, some people think Hannah is his mother or his nurse.

With their Youtube channel, they want to challenge the world

Hannah and Shane are the creators of Squirmy and Grubs, a YouTube channel where they discuss their relationship and break down people’s conceptions of it.

For example, the biggest misconception that many have is that caring for Shane is a burden for Hannah. Both Shane and Hannah insist that it’s not the case. In fact, they take moments where she cares for him as opportunities to hang out together.

Situations like that are the kind of thing that people think about when they ignorantly comment that I’m holding Hannah back in lifes. But she was able to have a totally healthy social life.

The two posted their first video in 2018 on their YouTube channel and have been documenting their relationship ever since. Despite all the naysayers and haters, they proved that love conquers all when they announced the big news: on September 4, 2020, Hannah and Shane got married.

A marriage that breaks down barriers

“I was pretty nervous when I had the conversation with Hannah’s parents about asking her to marry me,” Shane told InsideEdition.

He wanted it to be surprise, and even pretended he wasn’t feeling well so that it wouldn’t be compromised.

“We were at a family dinner party type thing after I graduated from college, and Shane pulled me aside and told me that he felt nauseous and thought he might throw up,” Hannah told Inside Edition. “So he took me, he was trying to get me away from the party, took me into our bedroom.”

And then he said some nice things, and the ring was hiding behind his back, so he had me pull that out. It was very cute.

Hannah Aylward in Inside Edition

And in September 2020, despite of the pandemic, the two tied the knot.

“On Friday, September 4th, I married the love of my life,” Aylward wrote on Instagram. “It wasn’t the big gathering we had always planned on having, but it was perfect. Thank you so much to @sburcaw for officiating over Zoom. We love you! ⁣⁣

Shane and I can’t wait to celebrate with our families in person when it’s safe, but for now, we’re husband and wife!!!! And that’s the most important part. I’m incredibly lucky to now be married to the greatest guy I know.

Shane also gushed about their union, even if it was not what they had originally hoped for.

“What Made Me Smile This Week? I
married my best friend,” he wrote on Instagram. “On Friday, September 4th, Hannah
and I tied the knot and became husband and wife! It was a private backyard
ceremony that we conducted over Zoom with our officiant. Certainly not the
wedding we originally imagined, but it was a beautiful moment filled with the
most important thing: our love for each other,  I’m beyond happy and smiling a whole
lot.”

Their love had an impact

Being a public figure on the Internet means you automatically attract trolls, no matter what you do. For Hannah and Shane, they got it even worse. But surprisingly, their incredible dedication to their love and to challenging people’s notions of love have made some haters change their minds.

“Some people who have left really mean comments have come back a few weeks later and commented again, apologizing and saying they’ve watched the videos and they realized they were wrong,” Hannah said.

For them, the most important is not the numbers on their channel but their impact on others. “And I don’t have a number for that,” Shane said.

Strong and Vulnerable: How I Learned to Let People In
Dad Who Was Laid Off Gets Hundreds Of Job Offers After Handing Out Resumes On The Streets
30 Monday Motivation Quotes to Start Your Week With Enthusiasm
A Love Note to Introverts: 10 Superpowers That Make You Amazing
Coronavirus: 3 dos and don’ts when it comes to social gatherings