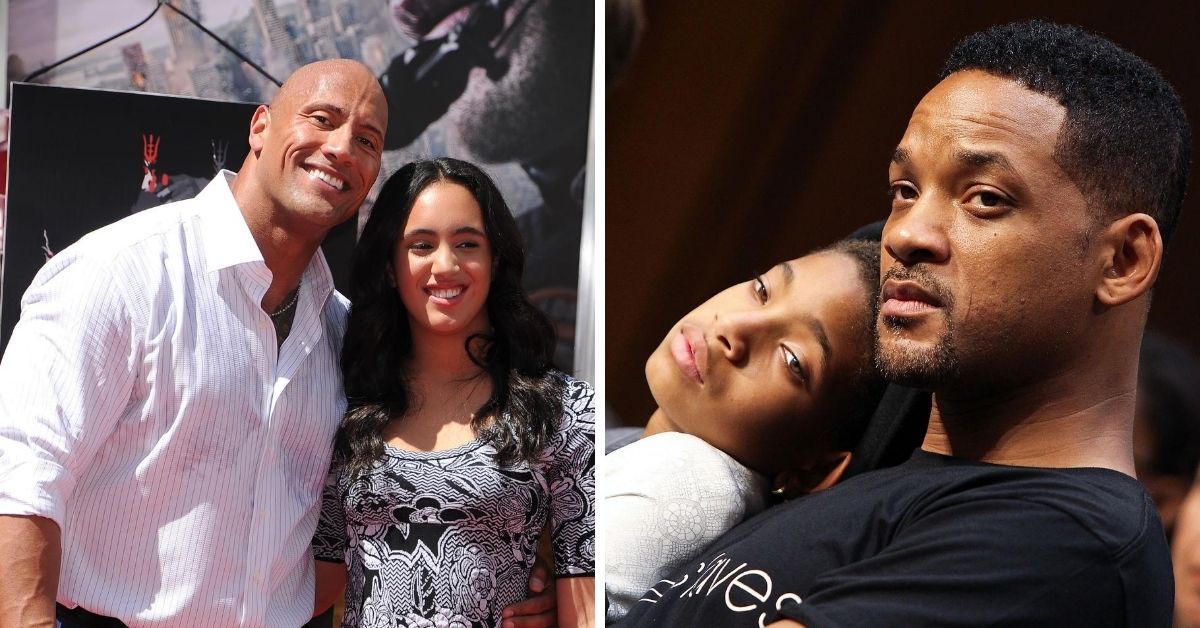 When it comes to male celebrities, it might be assumed that most fathers-to-be would love to hear that their baby will be a boy, so their names live on. However, scientists have shown that having daughters might improve a man’s career and life, overall. It appears that parenting girls can help men become more empathetic and the following five celebrity dads are living proof of that.

Whether they come from poor or broken households, these male celebs did their best to make sure that their daughters will have everything they need, especially the protection of a loving dad.

Just as every other parent, they’re not perfect. But while they might’ve made some parenting mistakes in the past, they were wise enough to look beyond the “I’m the adult, so I know better”. They were able to listen to their daughters who eventually taught them some very valuable lessons.

Here are five celebrity dads who reveal the lessons they learned from raising little girls:

1. Will Smith and Willow Smith: she introduced him to feelings

Will Smith is the father of three, but it took a daughter to make him change his approach to parenting.

The actor admitted that he grew up with a very strict father. Ever since he was a child, Will was taught that success can only be achieved with discipline and hard work. While a little discipline never hurt anyone, a forced military mindset made his daughter Willow rebel against him.

Her song Whip My Hair was a huge success and she was on an ongoing tour when she decided that she no longer wanted to continue it. Despite making a commitment and having a contract, she simply didn’t feel like going on tour anymore. The two had a big argument on the matter and in an act of defiance, Willow completely shaved off her hair.

Will
was devastated, but understood that his daughter was protesting against all his
strict rules. Smith learned that forcing her to do things she didn’t want to,
will only make her hate him later in life.

My desire for her was overriding her desire for her. And I had a real epiphany on that and how bad a person will hate you if you keep forcing your wishes onto their life.

2. Jay-Z and Blue Ivy: from violent household to listening to his child’s feedback

We’re not trying to use any stereotypes here, but it’s a fact that people who come from a violent household are more likely to become aggressive themselves. Not Jay-Z though!

He is proud to say that the managed to raise his children in contrast to the way he grew up. In an episode of Letterman’s My Next Guest Needs No Introduction, the rapper shared a really cute story involving his daughter, Blue Ivy:

He was picking
her up from school and they were in a hurry. Just as any other kid, Blue Ivy
was asking “a thousand questions” so Jay kind of lost his patience there,
raised his voice and told her to get in the car. Minutes later, the little girl
told her father: “I didn’t like when you told me to get in the car the way you
told me.”

Not only that his heart melted, but he also learned that he should be more patient the next time. Children ask millions of questions and it’s our duty to give them answers.

She’s six! It hurt my feelings. And I was like, ‘That is the most beautiful thing you’ve ever said to me!’

3. Dwayne The Rock Johnson: from wrestling champion to a feminist hero

The Rock began his career in the ring where he became one of WWE’s biggest stars. He is now one of Hollywood’s most beloved action man and the happy father of three girls: Simone, Jasmine and Tiana.

If you’re a fan, you’ve probably already seen Dwayne’s heartwarming photos and videos with his daughters on social media. Jazzy and Tia are still keeping him up for bedtime stories, but the eldest one has just turned 19.

In fact, Simone (Dwayne’s daughter with ex-wife,
Dany Garcia) is following her dad’s steps. Yes, she officially signed her
contract with WWE after being involved in training for two years.

One thing’s for sure — The Rock couldn’t be more proud of all his daughters. They made him the great man that he is today. He learned to appreciate women at a whole different level and doesn’t hesitate to be vocal about it either:

I come from a family of beautiful, strong, diverse and intelligent women. […] The world’s a better place because of you and I’m a very grateful man to be by your sides. To ALL the women out there of all ages and races, thank you.

Watch this Goalcast video if you want to be a better parent:

4. Billy Ray Cyrus and Miley Cyrus: more of a parent and less of a best friend

Billy
Ray Cyrus used to be the family star until his daughter rose to fame. He was
always supportive about Miley’s success and taught her that she should always
try to evolve and celebrate her journey.

Not that he didn’t want to be a better father to Miley, but his lifestyle and divorce from her mother made him choose a parenting approach that he now regrets. He wanted his daughter to see him more as a best friend, rather than a parent.

Today, Billy believes that if he would’ve been more of a father figure, Miley would’ve made better choices regarding her public displays. The good news is that they both learned from past mistakes and are now mentors to each other.

And sometimes I would even read other parents might say, ‘You don’t need to be a friend, you need to be a parent.’ Well, I’m the first guy to say to them right now: You were right.

5. Eminem and Hailie: simply being there

Everyone knows about Eminem’s turbulent upbringing — his biggest hits were inspired by his own experiences.

When he became a father, Eminem swore that he would do anything in his power to protect Hailie from facing what he did as a child. And he tried, but he couldn’t control everything the way he wanted to.

What
he didn’t realize at the time was that while he was trying to give his daughter
the life that he never had, he was mostly away. So Hailie probably saw her
father more on TV than in real life, especially after Eminem and her mother got
divorced.

Luckily, the two somehow managed to still keep a healthy father-daughter relationship. Hailie grew up to be a wonderful young lady and Eminem now knows that being there for his daughter is more important than anything else.

Just being there. Not missing things. If there’s anything important going on, regardless of what it is, I’m there.

There is no universal recipe to parenting–so find your own

It’s quite easy to make mistakes while raising a child, both as a mother or as a father. There’s no universal recipe for parenting. You’re the adult, you have the experience, you have to make decisions for your kid’s future — you’re the one teaching them lessons and not vice versa. But these dads show us that we can also learn a thing or two from our children.

Raising daughters in the spotlight hasn’t been an easy task for them, but it definitely changed their lives and turned them into better men.

Father Adopts ‘Feral Child’ Who Was Locked In Tiny Room For The First 6 Years of Her Life
From toilet paper to electric guitars: How shopping habits of Canadians changed during COVID-19
Heroic Helicopter Crew Saves 214 People Trapped By Deadly Californian Fires
Coronavirus: 3 dos and don’ts when it comes to social gatherings
Woman Shamed For “Small” Engagement Ring Has A Powerful Message To Haters