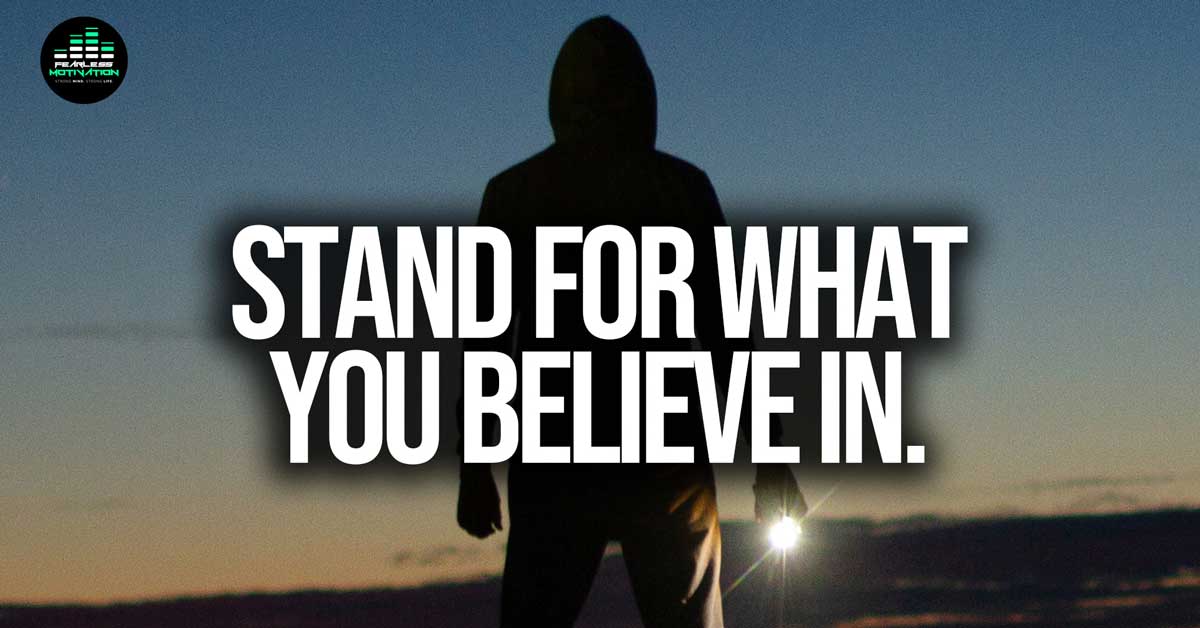 Stand For Something – Motivational Video

Stand For Something – Motivational Video by Fearless Motivation – WATCH FREE:

You have to stand for SOMETHING.

Sure, strive for achievement.   Sure, make the money, there’s nothing wrong with that – but NEVER let that be your DRIVING FORCE.

Have a standard which you live by. A standard that can NOT be broken. MORALS and INTEGRITY that NO ONE can penetrate, with any amount of money, with any reasoning.

You have a MIND OF YOUR OWN… USE IT.

If that means less money in the short term by turning down things that don’t align with my values: SO BE IT!  I can tell you, it will absolutely lead to a BETTER LIFE in the long term – it will lead to PRIDE and SELF-RESPECT… knowing you are someone of their WORD.

If it means life is HARD in the short term because you refuse to do certain things, or refuse to deal with certain people: SO BE IT.

I can tell you, it will absolutely lead to an EASIER LIFE in the long term…   A life with less drama, more PEACE and absolutely more PRIDE IN YOURSELF.

If that means NOT listening to family, friends, respected figures because you KNOW whatever is being said is wrong: BE BRAVE ENOUGH to stand for what you believe in. Whatever it is.

My soul is clear. I sleep like a baby because I know I don’t break away from my morals and ethical guidelines.

Set the example by YOU setting moral standards that are unbreakable and BECAUSE OF THAT living a live beyond all comprehension.

NOT JUST A LIFE FULL OF PRIDE but a life full of achievement, abundance and PURPOSE.

No matter how you conduct yourself in life, you are setting an example for those around you to follow… What example do you want to set?

Do you want to stand for something more than money and achievement?
What do you care about?
Who are you and what do you stand for?
What do you KNOW IS RIGHT? LIVE BY THAT.

73% of Canadians don’t want to cover costs for Prince Harry, Meghan Markle: poll
Prince Harry, Meghan will no longer be working members of the royal family
My “Stress” Was Actually High-Functioning Anxiety
Wolfy the dog stayed by missing 3-year-old after Australia floods stranded her
What I Learned from i4cp’s Research on Culture Change (i4cp login required)